Street art exhibit will show the human side to HIV in Ireland.

(Dublin, Ireland – 10th May) An upcoming art exhibit, ‘All Together Human’ featuring leading artists will highlight the human side of HIV – the human immunodeficiency virus on Irish AIDS day, June 15th 2017

The exhibit is being organised by artist Will St Leger for HIV activist group, ACT UP Dublin. For one day only, the show will feature work by 15 celebrated artists, including MASER, Jim Fitzpatrick, Sean Hillen along with popular illustrators; Aoife Dooley, Fuchsia MacAree and Friz. In addition, there will also be a, ‘Human’ photo project by photographer Hazel Coonagh.

The exhibition will take place in Filmbase, Dublin on Thursday 15th June. where the artwork will be sold by silent auction. Proceeds will be going to Dublin chapter of  international HIV/AIDS activist group, ACT UP.  ACT UP Dublin campaign for a more effective response from government and community organisations as new diagnoses of HIV among gay and bisexual men have increased dramatically in the last decade. (see notes)

Speaking about the upcoming show organiser Will St Leger said,  “I want the show title, ‘All Together Human’ to sum up theme of this exhibit. Across our social, religious, economic and geographical differences, HIV – the human immunodeficiency virus – affects us as people.” Adding, “Altogether human in our weaknesses and strengths, our failures and achievements, our rage and joyfulness. All together, human, in solidarity, defiance and hope.”

‘All Together Human’ exhibition opens for one day only on Irish AIDS Day. Thursday 15th June 2017 at Filmbase, Curved Street, Dublin. 6pm until 10pm  – Artworks will be sold by silent auction in aid of ACT UP Dublin.

High resolution poster and logo along with selected artworks are available on request: Facebook event page www.facebook.com/events/688335311346086/  – Follow ACT UP Dublin on Twitter for updates; @actupdublin

About ACT UP Dublin:

ACT UP Dublin is a diverse, non-partisan group of individuals united in anger and committed to direct action to end the HIV/AIDS crisis. www.actupdublin.com

Provisional figures from Ireland’s Health Protection Surveillance Centre show more new HIV diagnoses were reported in 2016 than in any previous year. The final total showed about a 6% increase over 2015 figures, which had previously been the highest on record.

In 2015, Ireland’s Health Protection Surveillance Centre (HPSC) recorded 485 new HIV diagnoses—the highest number ever in the history of the epidemic in this country. Of particular concern, new diagnoses among gay and bisexual men have increased dramatically over the past decade, more than quadrupling since 2005. ACT UP Dublin believes that these figures underscore the compelling need for a more effective response from government and community organisations.

1. New HIV diagnoses are at record highs in Ireland: Provisional figures from Ireland’s Health Protection Surveillance Centre show more new HIV diagnoses were reported in 2016 than in any previous year. The final total showed about a 6% increase over 2015 figures, which had previously been the highest on record.

2. Action is needed to tackle this epidemic: The Irish government’s response to this health crisis is falling short. We want to rouse the Irish government, community stakeholders, and the public at large into action to address the ongoing epidemic.

3. Living with HIV has changed: With access to proper care and treatment, a person diagnosed with HIV today can expect to live a long, healthy life. Effective treatment means that they will not transmit the virus to sexual partners. Despite these new realities, outdated ideas about HIV persist. Stigma & discrimination hurt people living with HIV and undermine HIV prevention efforts by making people afraid to seek information, services, and care.

4. We need to tackle HIV-related stigma: Advances in treatment not only save lives, but offer powerful new ways to reduce HIV transmissions. Pre- exposure prophylaxis (or PrEP) is a safe and highly effective way for HIV-negative people to prevent HIV. Taking a single daily pill provides nearly complete protection against HIV. We in the community are ready for new prevention options like PrEP. Further delay making PrEP available in Ireland will result in needless and avoidable new transmissions. 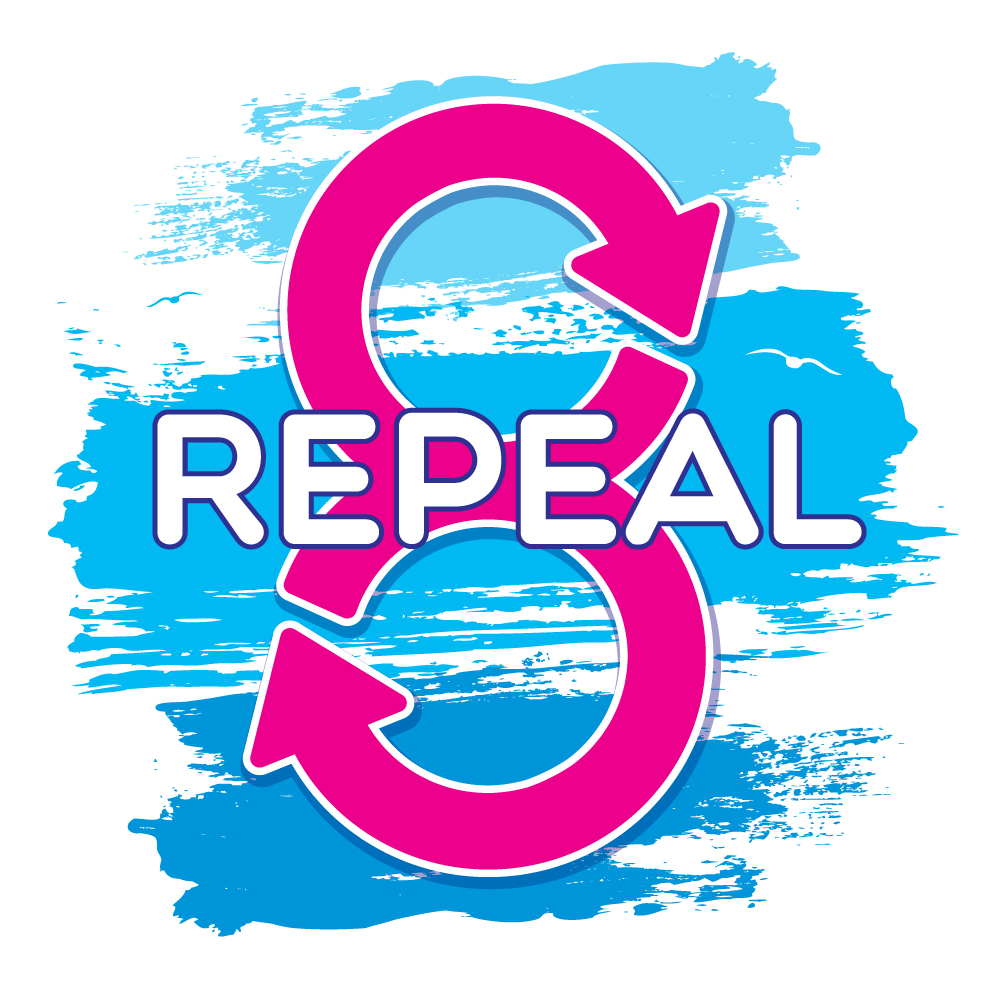 The Copper House gallery  will be hosting an  event in aid of the Abortion Support Network on 11th Oct, organised by Aifric Ní Chríodáin.  I’ve donated this piece of work to the show. All proceeds go to Abortion Support Services for Irish women that need assistance accessing abortion services in the UK .

I’ve never liked January. Even though I celebrate my birthday at the end of the month, January is the time of the year when reality comes crashing down after the festive season and everything seems a bit gloomy.

Which is why the folks behind First Fornight have been doing amazing work over the past few years to highlight mental health in Irish society through a dedicated arts Festival. This year I was invited to produced a street art piece for the festival which runs from Jan 2 – 12. The piece I made was about Facebook and our relationship with our ‘friends’ on social media.

In the early days of the internet we talked about how Web 2.0 was creating a ‘Global Village’. For most people access to information on the world wide web has dramatically changed how we interact. In the past decade I’ve seen the effects of overreliance on social media, I think maybe it’s turning us into, ‘Like’ zombies, ‘Retweet’ robots. More and more the need for cyber vailidation has pushed meaningiful dialogue into the background.

Among the clutered status upates, images of cute kittens and  exclaimtions that there are, “x amount of sleeps till…”  a single status by someone calling out for help can be lost. Even if seen, do we ‘like’ it and move on without checking in with them?

My piece is about a breakdown of Facebook. The ‘wall’ is broken and refusing to by tied to the generic status update, I’ve written by hand the lyric, “I am human and I need to be loved” taken from How Soon Is Now by The Smiths.

It’s been 6 six years since I did this stencil. Madonna in the Ghetto came from my first show ‘Artivism’ in 2006. I created five in blue but wanted this one to be special. I was asked to sumbit a piece of work for an exhibtion to raise funds for Kasey Kelly and 1 year old whose was diagnosed with a rare malignant brain tumour known as Atypical Teratoid/Rhaboid or ATRT. This type of tumour is very aggressive and extremely rare worldwide.

An exhibition featuring this stencil and other works will be held Holy Thursday at The Front Lounge, Parliament street, Dublin to raise fund for Kasey’s life saving operation.

April 4, 2012April 4, 2012 by Will St Leger Categories: Fundraiser, My WorkTags: Kare4Kasey, Kasey Kelly, Madonna in the Ghetto Leave a comment

Recently I was invited by Musical Youth Organisation to create a custom instrument for a charity auction in May this year.  I’ve never painted an musical instrument before, so it was a great opportunity to create something special.

I choose the bass guitar, because I love bass guitars! (I own three) When I’m not making stencils, I’m playing bass with my band, FELCH or practising at home. My favourite bass guitarists are quite diverse, ranging from Metal to Disco, such as Lemmy of Motorhead, Bernard Edward of Chic, Pino Palladino bassist with Gary Numan, Chris Wolstenholme of Muse.

With this in mind, I decided to make a ‘meat’ bass for two reasons. Firstly, if drums are the bones of music, bass is the meat, lead guitar is the skin and vocal are the clothes. Secondly, The Smiths 1985 album, Meat Is Murder is one of my all time favourite records. Not necessarily the title track, but songs like, Headmaster Ritual, What She Said and Barbarism Begins At Home have some of the best bass lines ever.

The Making of Meat Bass

I used the first bass guitar I’d ever bought, an Encore bass (an inexpensive range of entry-level guitars). I’ve played it to death so it’s been bashed about a bit.

I sprayed on a base red colour, then added a darker red edge. After that I used a sponge with a brighter red to build up texture.

Once the paint had dried, I used paint pens to create veins of fat running through the meat based on pictures I had taken at a local butcher shop

Next, I sanded down the head stock and gouged into the wood to make ‘cracks’ – I mixed OXO cubes and a little water and painted it into the cracks (because I wanted to used ‘real’ meat’ on the bass.

I pulled out the tuning pegs and replaced them with the tops of stainless steel forks.

Finally I varnished the whole body with a gloss and reassembled the electronics and scratch plate. I restrung it and wrapped ‘barbered wire’ around the strings at the skull of the headstock with galvanised wire.

And to my relief the bass is still in tune and working order.

Can strangers collectively own a piece of artwork? Cause & Effect is a participation exhibit where 100 people are given the choice to keep or share art. I’m creating 100 stencils which fit together as four large jigsaw like works. Funders of the show will automatically own one of these pieces of work. However will they break up the larger artwork by taking their own piece or will they share it with the other owners?

Be part of this show! Fund the show and you will own one piece of work (limited to 100 people) entry to show and drink reception. Artwork signed and numbered by artist. Your name will appear on the back of the piece of the artwork. You will also get a limited edition A3 poster of one of the four completed artwork signed and numbered. Click here: http://www.fundit.ie/project/cause–effect

Wednesday Dec 1st is World Aids Day. Across the globe, people will be raising money in different ways for AIDS awareness, prevention and treatment. In Dublin, Open Heart House (www.openhearthouse.ie) in partnership with MAC Cosmetics are organising a 24 hour sleep out in Dublin city centre. Una Mullally (big spoon) and myself (small spoon) will be sleeping overnight out on the streets of Dublin city centre to raise money for Open Heart House. Donate online here

Under The Influence is exciting group exhibition bringing established and emerging visual artists together to support Gay Community News.

20 artists, illustrators and photographers have been selected to produce a piece of work that demonstrates their biggest influence. The exhibition, which opens at The Front Lounge on Friday 5th March is curatored by Will St Leger to support the GCN Forever campaign.

Proceeds from sale of works will be donated by the artists to support GCN. Under the Influence opens Friday 5th March in The Front Lounge at 8pm with a drinks reception, all are welcome. RSVP our Facebook event page here